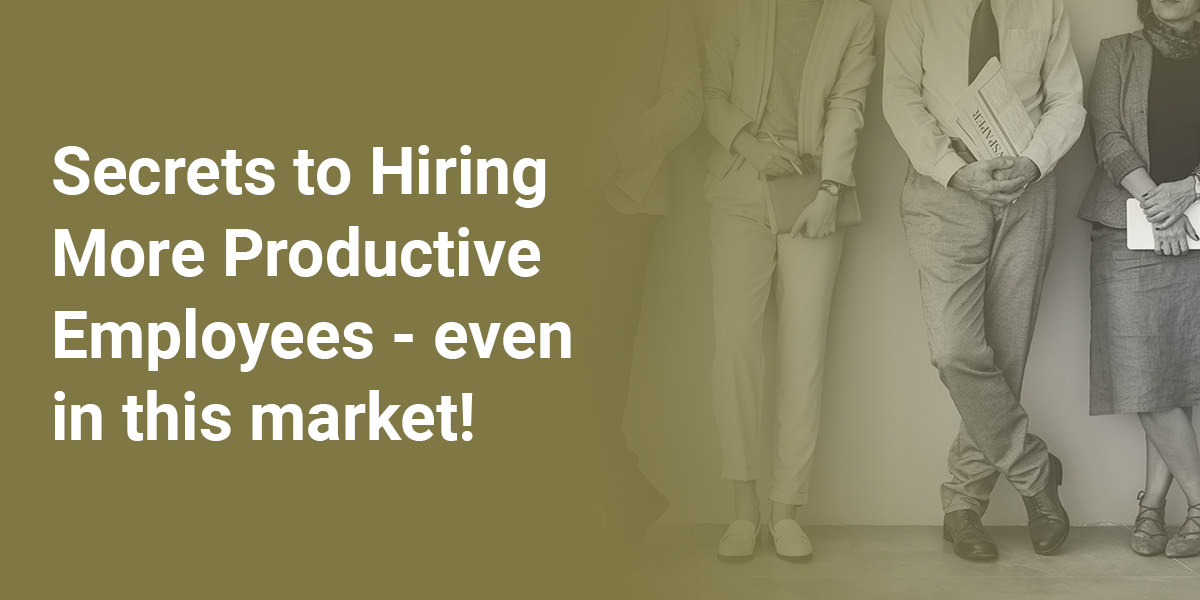 Secrets to Hiring More Productive Employees... Even in This Market!

It's hard to hire anybody in this market - let alone people who are hard-working, proactive, focused and efficient. But it is possible! Here's how to spot - and land - more productive employees:

Every hiring manager's goal is to find employees who are productive and make a positive impact on the bottom line. However, evaluating productivity in the hiring process can be a challenge - especially in a tight market. If you are looking for impactful new employees, here are some secrets to identifying the candidates with the most potential for productivity.

Signs of a Highly Productive Applicant

Productivity is a hard trait to spot until you see it in action. However, you can look for signs in the resume-screening and phone-screening processes that indicate you've got a productive applicant, including:

When looking for productive employees, it is wise to weigh hard and soft skills equally. Just because someone possesses all the technical qualifications for a role does not mean they will necessarily be productive. Soft skills like these give a peek into a candidate's values and approach to work and ultimately, their level of productivity:

You can ask candidates directly whether they are productive employees, but nearly every person would say "yes," whether they believe it to be true or not. Behavioral interview questions can be a much better tool, requiring candidates to talk about real-world scenarios from their actual experience.

Questions like these can help you identify productive candidates:

Gaining a Competitive Edge in the Hiring Market

Finding productive workers in a highly competitive market isn't easy - but it can be done. Savvy employers are turning to staffing and recruiting partners to help them find and hire productive employees.

The right staffing partner can help reduce hiring risk by speeding up the hiring process to keep talented candidates interested, conducting thorough reference checks that include seeking out evidence of past productivity and performance, offering temporary-to-hire engagements that allow you to evaluate a candidate on the job before making an offer, and even direct recruiting from your competitors.

Forming a partnership with an effective staffing and recruiting firm allows you to tap into the passive candidate market - an absolute must in today's economic climate. Waiting for productive candidates to chase you down in this environment is an exercise in futility. Go out and find the productive talent you need with a staffing partner today.